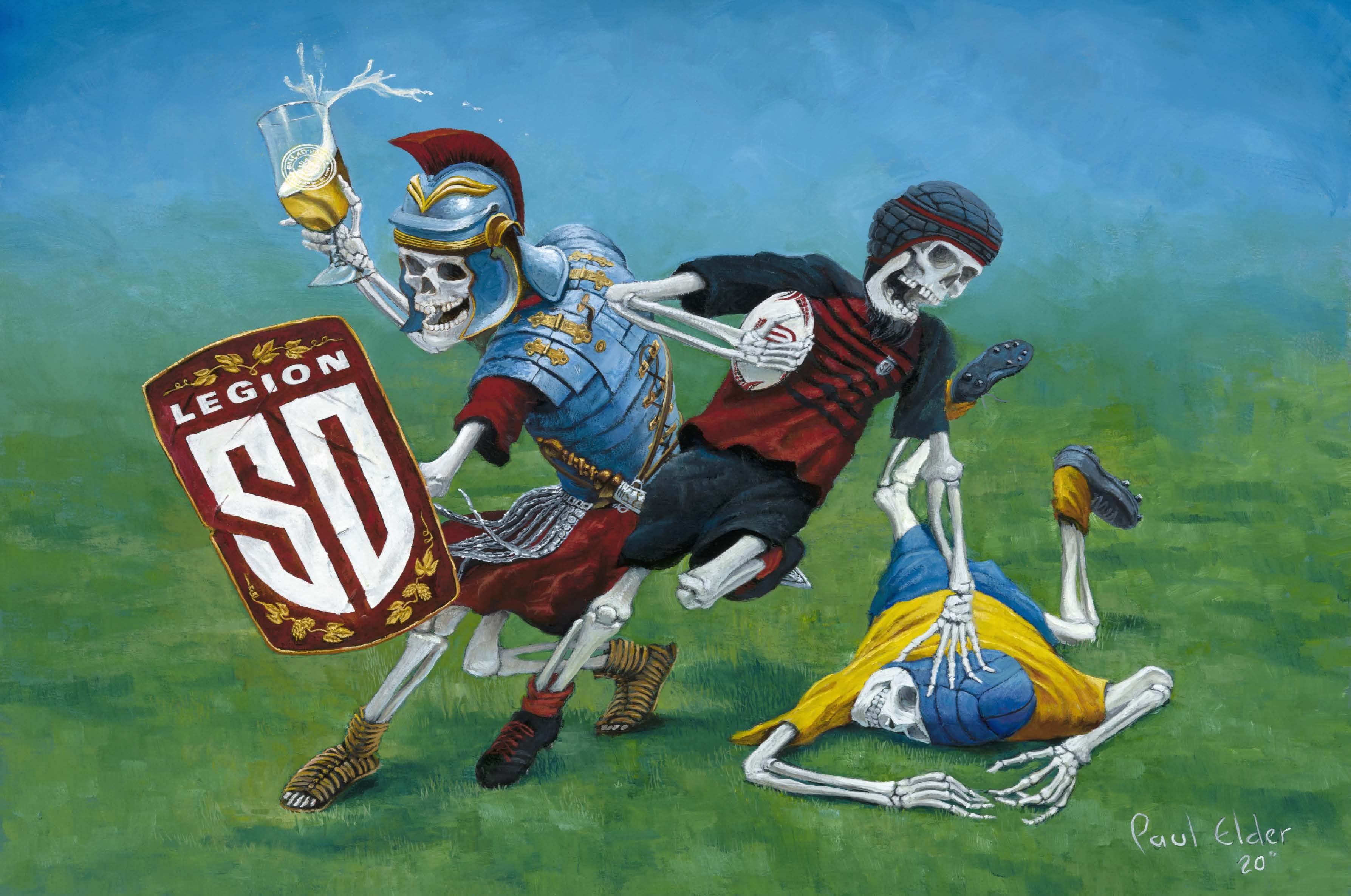 “Ballast Point is a staple among the local San Diego craft brewing community, and we’re proud to have their support this season,” said SD Legion President & CEO Ryan Patterson. “Our team loves the artwork and label that was created by long-time Ballast Point artist Paul Elder. The Ballast Point team did a terrific job cleverly embodying both brands - rugby and craft beer - into this can design for our fans.”

Brewed to commemorate the partnership between Ballast Point and San Diego Legion, the specialty beer will be available throughout the 2021 season of Major League Rugby. A refreshing German-style Helles lager, Legion Lager finishes clean with a hint of hops and chardonnay aromatic notes. It’s the perfect, crushable lager for enjoying rugby!

“Brendan (Watters, CEO) and I are both huge rugby fans, so we’re thrilled to be an official San Diego Legion partner this season and helping grow rugby in the U.S.” said Chris Bradley, Ballast Point COO. “When brainstorming recipes, we decided Longfin Lager - one of our best-selling, year-round beers - would be the perfect beer for watching rugby during the warm weather months. Our team took that recipe and gave it a new look, just for San Diego Legion fans.”

In addition to brewing, packaging and releasing Legion Lager by Ballast Point in 16-ounce cans, Ballast Point is also the main jersey sponsor. Once the MLR team is ready to welcome fans into the crowd, guests will be able to enjoy the special release beer while watching rugby live this season.

About Ballast Point Brewing Co.
What started in 1996 as a small group of homebrewers who simply wanted to make great beer evolved into the team of adventurers known today as Ballast Point. A pioneering brewery born within the hallowed, hopped walls of San Diego’s Home Brew Mart, the complete art of the craft swims in the DNA of Ballast Point and informs both what’s inside and on the can. On March 2, 2020, Ballast Point officially returned to its iconic independent roots under the new ownership of San Diego-headquartered, Kings & Convicts Brewing Co., and continues to be an internationally recognized leader in the industry with 6 taproom locations in California and Chicago. From bringing a hoppy twist to a porter or adding four types of malt to its amber ale, to creating the breakthrough gold-medal winning Sculpin IPA, Ballast Point is known for adding its touch and asking if there’s a better way. With an emphasis on R&D and innovation, Ballast Point brews over 50 styles of beer and is distributed in select markets across the US and internationally. For more information, visit www.ballastpoint.com and follow our journey on Instagram and Facebook.

About San Diego Legion
Established in 2017, San Diego Legion is part of Major League Rugby (MLR), comprising 12 professional teams, featuring 11 from the United States and one in Canada. A founding team of MLR, SD Legion played its 2018-2020 games at Torero Stadium and will temporarily relocate to Las Vegas, NV for its 2021 season.

San Diego Legion Rugby – Just like all the sports you know, only better. sdlegion.com