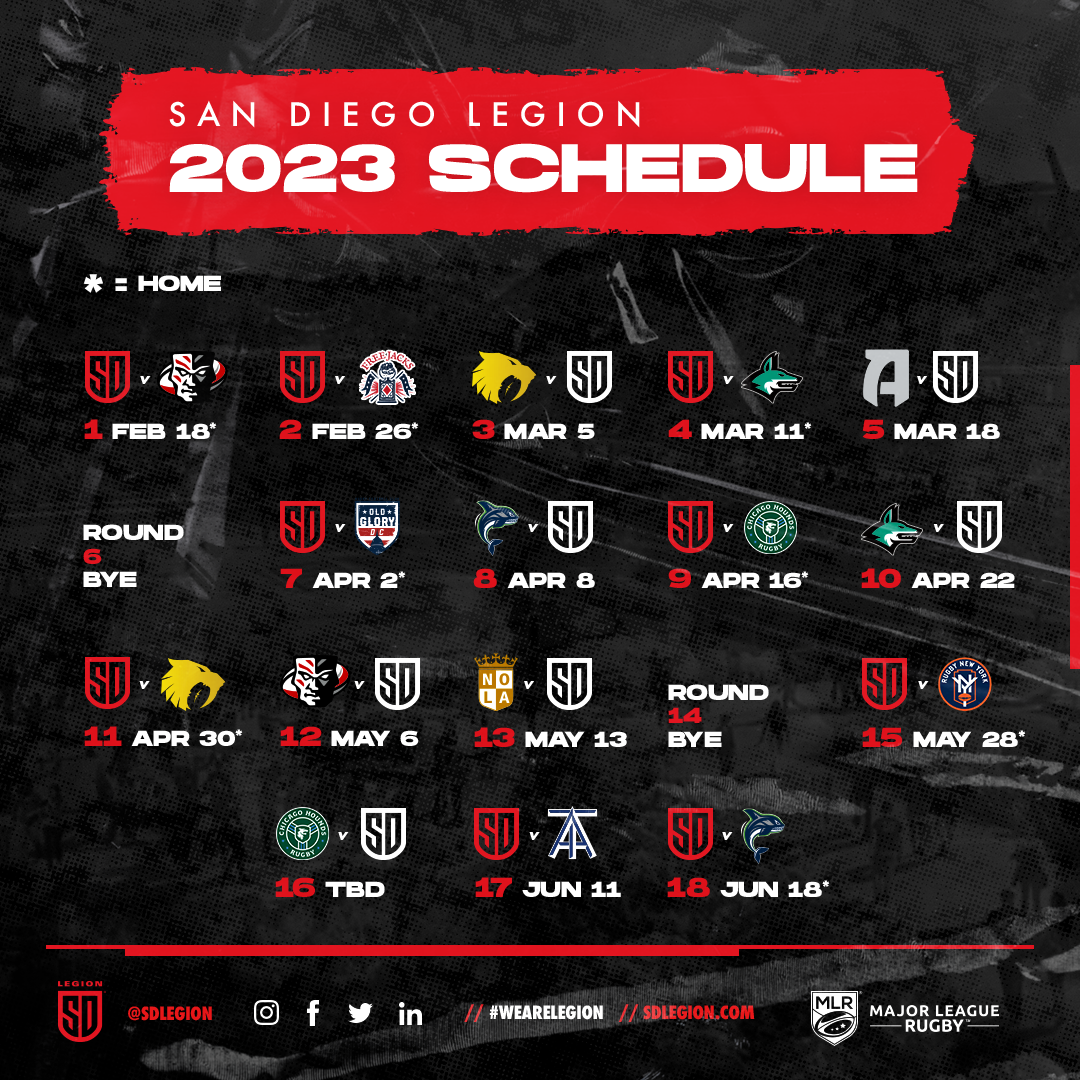 SEASON TICKETS FOR THE SD LEGION ARE NOW ON SALE

December 5, 2022, San Diego, CA - Season tickets for the San Diego Legion are now on sale to the public at www.sdlegion.com. The Legion is excited to welcome new and returning fans to the groundbreaking Snapdragon Stadium and hopes to break the Major League Rugby attendance record at their home opener on February 18, 2023. Entering its sixth season, the Major League Rugby regular season will include eighteen weeks of action, excitement, and pure sportsmanship.

“The excitement is building for the 2023 MLR season, and things are ramping up with tickets going on sale. Don’t wait! Get online now and secure your Legion tickets. You’ll want to be sitting in the best stadium in the USA, yelling and cheering on your local team to victory,” saysDanny Lee, Head Coach, San Diego Legion.

“It’s sure to be a thrilling start to the 2023 MLR season at the new Snapdragon Stadium—the best rugby venue in the US! We are looking forward to seeing all of San Diego come out and support our rugby team and experience the Legion at its new home stadium,” says Ryan Patterson, Team Owner.

“From the outset, our focus has been building San Diego Legion into a world class rugby organization. We have taken some great strides in this direction. With Snapdragon Stadium, we now have a world class home base for our players and fans. We are excited for them to come along, enjoy the experience and support San Diego’s team in its quest for the 2023 MLR shield” says Darren Gardner, Team Owner.

Our Mission: San Diego Legion Strives To Make The Sport Of Rugby As Beloved Here As It Is Globally And To Excite The Local Community About Rugby's Wonderful Diverse Culture And Positive Influence.

ABOUT MAJOR LEAGUE RUGBY Major League Rugby is a professional sports league entering its sixth season that represents the highest level of rugby competition in North America. The League evolved from seven teams in 2018 to 12 teams in 2023, featuring 11 from the United States and one from Canada. Matches are televised on Fox Sports, among other national and local market platforms. Select matches are available to stream live in North America on The Rugby Network, and all matches are available on The Rugby Network for international fans. MLR prides itself in fostering intense and high-stakes competition, while bringing together a passionate community built on the values of Respect, Inclusivity, and Tradition. For more information about MLR, http://www.MajorLeague.Rugby